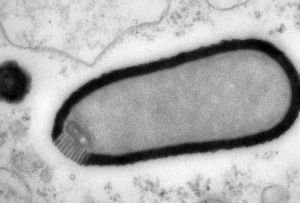 This sounds more like a B-movie plot than the background story for contemporary research…but it is true. Scientists have revived a giant virus that was buried in Siberian ice for 30,000 years — and it is still infectious. Thankfully it targets amoebae, but the researchers suggest that as Earth’s ice melts, this could trigger the return of other ancient viruses, with potential risks for human health.

How big is big? Big!  This ancient big boy is 150 times less compacted than any bacteriophage currently known. Thawed from the Siberian permafrost and believed to be more than 30,000 years old, this virus is new to science. Old becomes new!

Measuring 1.5 micrometers long, the viruses are 25 percent bigger than any virus previously found. Their oddly long, narrow shape inspired the scientists to call them pithoviruses. Sixty percent of its gene content doesn’t resemble anything on earth.

So should we be worried? The researchers acknowledged the possibility of contamination however they noted that they had performed the experiment three times and obtained the same virus from the permafrost each time. It’s even possible that some of those viruses could infect humans instead of amoebae which of course would be a worrying possibility. The risk of an outbreak of resurrected viruses to be “extremely low,” pointing out that scientists have been excavating permafrost and ice for decades without any known infections.