Not the reputation that most of us would want to have hey?  The most powerful storm to ever hit land – Typhoon Haiyan battered the Philippines with 235mph winds. The killer category-five storm forced hundreds of thousands of people to run for their lives as it swept through the islands bringing flooding, landslides, and 15 inches of rain.

Winds gusted to 235mph.  Sustained winds were clocked at 199mph. The storm’s estimated wind speeds of 147mph at landfall were 24mph stronger than those of Hurricane Katrina.

Apparently the the typhoon retained most of its strength because there was no large land mass to slow it down before hitting the islands. This region is comprised of flat islands that the storm just raced over. 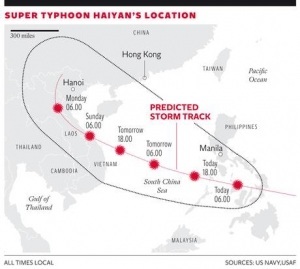